Ensembl
More ▼
On this page

Both the web and script version of VEP can use the same input formats. Formats can be auto-detected by the VEP script, but must be manually selected when using the web interface.

VEP can use different input formats:

VEP can read compressed (gzipped) input file of any format listed above, e.g.:

The default format is a simple whitespace-separated format (columns may be separated by space or tab characters), containing five required columns plus an optional identifier column:

A deletion is indicated by the exact nucleotide coordinates. For example, a three base pair deletion of nucleotides 12600, 12601, and 12602 of the reverse strand of chromosome 8 will be:

VEP also supports using VCF (Variant Call Format) version 4.0. This is a common format used by the 1000 genomes project, and can be produced as an output format by many variant calling tools.

Users using VCF should note a peculiarity in the difference between how Ensembl and VCF describe unbalanced variants. For any unbalanced variant (i.e. insertion, deletion or unbalanced substitution), the VCF specification requires that the base immediately before the variant should be included in both the reference and variant alleles. This also affects the reported position i.e. the reported position will be one base before the actual site of the variant.

In order to parse this correctly, VEP needs to convert such variants into Ensembl-type coordinates, and it does this by removing the additional base and adjusting the coordinates accordingly. This means that if an identifier is not supplied for a variant (in the 3rd column of the VCF), then the identifier constructed and the position reported in VEP's output file will differ from the input.

This problem can be overcome with the following:

The following examples illustrate how VCF describes a variant and how it is handled internally by VEP. Consider the following aligned sequences (for the purposes of discussion on chromosome 20):

The first individual shows a simple balanced substitution of G for C at base 3. This is described in a compatible manner in VCF and Ensembl styles. Firstly, in VCF:

And in Ensembl format:

In Ensembl format, the preceding base is not included, and the start/end coordinates represent the region of the sequence deleted. A "-" character is used to indicate that the base is deleted in the variant sequence:

The upshot of this is that while in the VCF input file the position of the variant is reported as 2, in the output file from VEP the position will be reported as 3. If no identifier is provided in the third column of the VCF, then the constructed identifier will be:

The third individual has an "A" inserted between the 3rd and 4th bases of the sequence relative to the reference. In VCF, as for the deletion, the base before the insertion is included in both the reference and variant allele columns, and the reported position is that of the preceding base:

In Ensembl format, again the preceding base is not included, and the start/end positions are "swapped" to indicate that this is an insertion. Similarly to a deletion, a "-" is used to indicate no sequence in the reference:

Again, the output will appear different, and the constructed identifier may not be what is expected:

Using VCF format output, or adding unique identifiers to the input (in the third VCF column), can mitigate this issue.

For VCF entries with multiple alternate alleles, VEP will only trim the leading base from alleles if all REF and ALT alleles start with the same base:

This will be considered internally by VEP as equivalent to:

Now consider the case where a single VCF line contains a representation of both a SNV and an insertion:

Here the input alleles will remain unchanged, and VEP will consider the first REF/ALT pair as a substitution of C for CAAG, and the second as a C/G SNV:

To modify this behaviour, VEP script users may use --minimal. This flag forces VEP to consider each REF/ALT pair independently, trimming identical leading and trailing bases from each as appropriate. Since this can lead to confusing output regarding coordinates etc, it is not the default behaviour. It is recommended to use the --allele_number flag to track the correspondence between alleles as input and how they appear in the output.

VEP can also call consequences on structural variants encoded in tab-delimited or VCF format. To recognise a variant as a structural variant, the allele string (or "SVTYPE" INFO field in VCF) must be set to one of the currently recognised values:

See the VCF definition document for more detail on how to describe structural variants in VCF format.

See https://varnomen.hgvs.org for details. These must be relative to genomic or Ensembl transcript coordinates.

Examples using RefSeq identifiers (using --refseq in the VEP script, or select the otherfeatures transcript database on the web interface and input type of HGVS):

HGVS protein notations may also be used, provided that they unambiguously map to a single genomic change. Due to redundancy in the amino acid code, it is not always possible to work out the corresponding genomic sequence change for a given protein sequence change. The following example is for a permissable protein notation in dog (Canis familiaris):

HGVS notations may also be given in LRG coordinates:

These should be e.g. dbSNP rsIDs, or any synonym for a variant present in the Ensembl Variation database. See here for a list of identifier sources in Ensembl.

VEP's region REST endoint requires variants are described as [chr]:[start]-[end]:[strand]/[allele]. This follows the same conventions as the default input format described above, with the key difference being that this format does not require the reference (REF) allele to be included; VEP will look up the reference allele using either a provided FASTA file (preferred) or Ensembl core database. Strand is optional and defaults to 1 (forward strand).

VEP can return the results in different formats:

Along with the results VEP computes and returns some statistics.

The default output format ("VEP" format when downloading from the web interface) is a 14 column tab-delimited file. Empty values are denoted by '-'. The output columns are:

The VEP script will also add a header to the output file. This contains information about the databases connected to, and also a key describing the key/value pairs used in the extra column.

The --tab flag instructs VEP to write output as a tab-delimited table.
This differs from the default output format in that each individual field from the "Extra" field is written to a separate tab-delimited column.
This makes the output more suitable for import into spreadsheet programs such as Excel.
Furthermore the header is the same as the one for the VEP default output format and this is also the format used when selecting the "TXT" option on the VEP web interface.

The choice and order of columns in the output may be configured using --fields. For instance:

Main information about the specificity of the VEP VCF output format:


Here is a list of the (default) fields you can find within the CSQ field:

Example of VEP command using the --vcf and --fields options:

VCFs produced by VEP can be filtered by filter_vep.pl in the same way as standard format output files.

If the input format was VCF, the file will remain unchanged save for the addition of the CSQ field and the header (unless using any filtering). If an existing CSQ field is found, it will be replaced by the one added by the VEP (use --keep_csq to preserve it).

Custom data added with --custom are added as separate fields, using the key specified for each data file.

Commas in fields are replaced with ampersands (&) to preserve VCF format.

VEP can produce output in the form of serialised JSON objects using the --json flag. JSON is a serialisation format that can be parsed and processed easily by many packages and programming languages; it is used as the default output format for Ensembl's REST server.

Each input variant is reported as a single JSON object which constitutes one line of the output file. The JSON object is structured somewhat differently to the other VEP output formats, in that per-variant fields (e.g. co-located existing variant details) are reported only once. Consequences are grouped under the feature type that they affect (Transcript, Regulatory Feature, etc). The original input line (e.g. from VCF input) is reported under the "input" key in order to aid aligning input with output.

Here follows an example of JSON output (prettified and redacted for display here):

In accordance with JSON conventions, all keys are lower-case. Some keys also have different names and structures to those found in the other VEP output formats:

VEP writes an HTML file containing statistics pertaining to the results of your job; it is named [output_file]_summary.html (with the default options the file will be named variant_effect_output.txt_summary.html). To view it you should open the file in your web browser.

To prevent VEP writing a stats file, use the flag --no_stats. To have VEP write a machine-readable text file in place of the HTML, use --stats_text. To change the name of the stats file from the default, use --stats_file [file].

This section contains two tables. The first describes the cache and/or database used, the version of VEP, species, command line parameters, input/output files and run time. The second table contains information about the number of variants, and the number of genes, transcripts and regulatory features overlapped by the input.

There then follows several charts, most with accompanying tables. Tables and charts are interactive; clicking on a row to highlight it in the table will highlight the relevant segment in the chart, and vice versa. 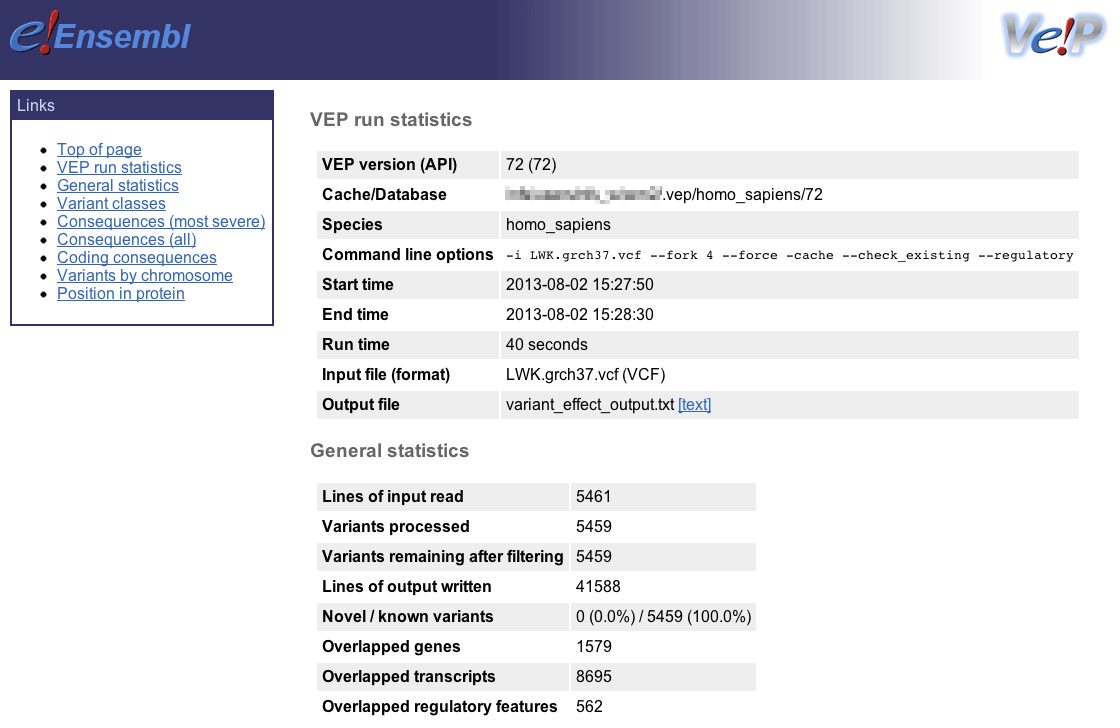 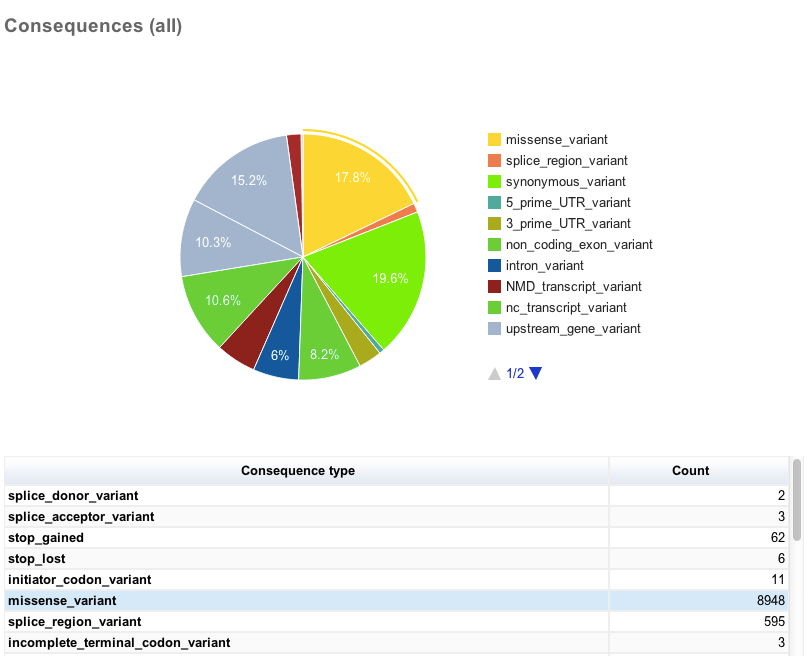 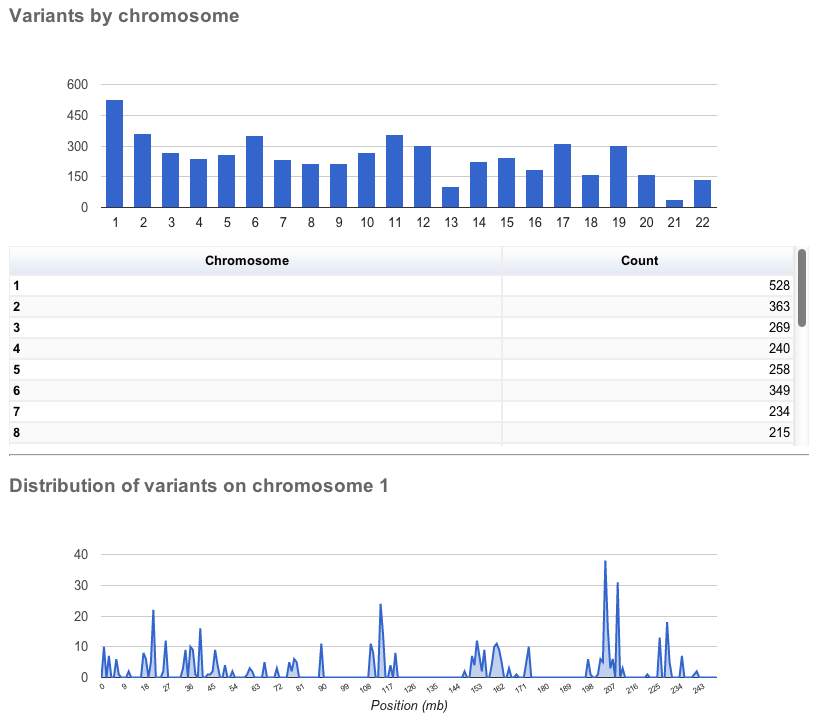 Distribution of variants across chromosomes